There’s a lot that sets GoSkydive apart from their competitors in the UK, and indeed worldwide. If

you spend time on the GoSkydive website, read their reviews and watch their videos, you’ll see that they present themselves differently. Check out their apprenticeship program, read up on their approach to ground training and convert their prices to dollars, and you’ll learn that they hire their staff, train their customers and price their services way differently.

Why has Gordon broken the mold? In his own words, “Because it’s more than just a jump.”

At GoSkydive, it’s all about the experience.

If you’ve been following our journey here at DropZone Marketing, if we’ve worked together, or if you caught us recently at the PIA Symposium in Dallas, you’ll know exactly why we were drawn to Gordon’s story and to GoSkydive. We, too, are laser-focused on the customer experience.

We spent an hour in conversation with Gordon to learn about how he came to open GoSkydive in the middle of the English countryside more than a decade ago, and the not-so-secret secrets behind his success. As is predictable, the path he traveled was rather unconventional.

Gordon’s skydiving story is not one that begins with him desperate to jump and finally having the opportunity. He wasn’t especially interested at first, but with time – like the rest of us – he was bitten by the bug.

Originally from Cape Town, South Africa, Gordon had several skydiving buddies. One 1991 night in a bar in the Namibian desert, his friends convinced him to jump. The next day he completed a static line course and did several more static line progression jumps in South Africa and Namibia and, in time, got his license.

He was studying Mechanical Engineering at the time. He had great ambitions as an engineer and viewed skydiving only as a hobby, but along the way, the line began to blur.

As a contract engineer, Gordon traveled around the world working on major projects. Wherever he went, he sought out a dropzone and jumped as often as he could.

The contrast between Gordon’s profession and the hobby he’d become so passionate about was stark. The world of mechanical engineering is governed by logic, processes, and systems; skydiving dropzones are not. He started to notice what DZs were doing well and where they struggled and could see how operations could be improved.

In 2003, a short-term engineering contract took Gordon to Southampton. Six months turned into six years and with more than 17 years of skydiving under his belt and a head full of ideas on how to run a  DZ, Gordon was ready to make his mark.

After carefully storyboarding the end-to-end customer experience; thoughtfully developing a vision, set of values and company culture; and investing heavily in systems and procedures for efficiency, customer experience, and safety, in 2008 Gordon opened GoSkydive in picturesque Wiltshire.

There’s Magic in the Tandem

For Gordon, tandem skydiving and sport skydiving are apples and oranges; two completely different markets. As such, GoSkydive caters solely to the tandem crowd.

A tandem skydive is not an experience sought after only by “adrenaline junkies”. People jump tandem for all sorts of reasons. To celebrate a triumph, memorialize a defining moment, release heartache and hardship. A tandem is often symbolic, deeply meaningful and forever memorable.

It’s the kind of experience that people remember in their golden years and even during their final hours. As a one-off and potentially catalytic experience, it’s important to get it right.

Gordon realized that skydiving, of the tandem variety anyway, is not at all an extreme sports business. It should be borne out of the customer-service industry, treated as a lifestyle business, and inspired by the tenets of adventure tourism.

A tandem doesn’t last the half hour it takes to get from the ground, up to altitude and back to terra firma. The experience starts long before a customer even arrives at the DZ, and lasts a long time after. There are myriad opportunities along the customer lifecycle to exceed their expectations, wow them, and make them raving fans.

Gordon’s observation is that skydiving is such a powerful and impactful product that by the time a first-time jumper lands, s/he has forgotten the overwhelming feeling upon arrival … the pages of paperwork required … the too-quick ground training … the long wait before jumping, etc. 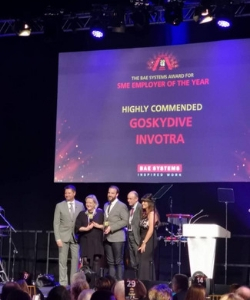 Frustration dissipates on exit and the staff’s transgressions are forgiven amid shrieks of delight once on the ground. The industry banks on the inevitable sentiment of “That was the best experience of my life” as a barometer of success.

Gordon says, “We can do better.”

To improve the customer journey, Gordon looked outside of the industry for inspiration and best practices. He researched notable founders and CEOs, read up on out-of-the-box business models and visited with incredible people in amazing places. Disney, Apple and Virgin were major influencers in his thinking.

Gordon knew he needed more than his core principles and epiphanies to establish a successful dropzone. As an engineer, this was not his territory. He sought an investment advisor and a business mentor to guide him through the process of finding a location and setting up shop. A business coach was his wingman during his first five or six years in operation. His goal was leadership, not management.

From the beginning, his focus has not wavered. Above all else, safety, customer service, building an exceptional team, robust and efficient systems; in short: excellence.

Gordon’s philosophy boils down to this: proactively manage expectations.

The GoSkydive website is welcoming and warm, written in plain speech, and is easy to navigate. Customers know what’s going to happen, when, and why it’s important.

Up to 20 people arrive at the DZ each hour. Every customer is personally greeted, checked in via iPad in the parking lot, and shown where to go next. Customers feel comfortable, confident and supported.

Ground training is conducted by a “tandem master” who is dedicated only to the task of training. They’re not in between loads and watching the clock, their role is to help customers feel prepared, empowered and safe. Unique in the field, GoSkydive’s training includes clicking into a harness suspended from the ceiling to safely practice freefall and landing positions.

After being kitted up, tandem students are introduced to their instructors and board the plane. While under canopy, the instructor explains that they’ll be headed to meet their next student when they land and tells the customer who will be meeting them on the ground for the next part of their experience.

During every facet of the experience, customers know what’s going on. And it makes all the difference.

The Right People for the Job

Gordon’s hiring strategy is like no other in the industry. Top of his list for a solid candidate: interpersonal skills and emotional intelligence. Note, not skydiving skills. Those are teachable.

In fact, a lot of Gordon’s more than 60 full-time hires have come out of The GoSkydive Tandem Skydive Instructor Apprenticeship scheme – a comprehensive two-year program for people with a can-do attitude who are interested in skydiving and the industry.

And as with his customers, Gordon manages staff expectations too. Under the hood of the well-oiled machine that is GoSkydive is a prescribed set of systems and processes. Every team member knows what is expected of them, understands the importance of their link in the chain, and is empowered to make suggestions for efficiencies and improvement.

Eighty percent of what GoSkydive delivers is standard – there’s a formula for success. For the 20% that’s less predictable, his highly-trained, values-based team of professionals is equipped and capable to manage it. Eleven years in, Gordon can step back and the business will continue humming toward excellence.

Not for the Penny Pincher

In Gordon’s experience, first-time skydivers are in search of the most rewarding experience money can buy, not the cheapest. Tandem clientele are not as price sensitive as other segments across the field.

He believes (as do we at DZM) that the discount game has negatively impacted the industry. Competing on price is a non-starter. Competing on service, now that’s a game changer.

GoSkydive’s prices are higher than most. A tandem from 15K feet will cost you $412; from 10K feet is $335. The DZ is hopping every weekend, and by the end of this year they’ll have given more than 10,000 people an exceptional tandem experience.

Gordon believes that the very best type of marketing for your business is that which you cannot buy: word of mouth.

Delivering a superior end-to-end experience creates a tremendous opportunity for people to spread the word loud and proud through their networks. But, Gordon cautions, don’t be shy to ask people to shout from the rooftops. Oftentimes, an invitation to be part of the cheering squad is all that’s needed to inspire action.

At DZM, we couldn’t agree more.

Blue Skies, Gordon and the GoSkydive team – we salute you!