When we talk to Maxine Tate, she’s decidedly mid-adventure — her travel trailer is parked right outside Mount Rainier National Park, where she arrived last night after four days’ coaching at a Missouri dropzone. She only has a couple of days before she’s back to the East Coast for three more weekends of coaching, but she’s going to enjoy every moment of the meantime (including knocking out some training for her brand-new competitive discipline, speed skydiving). Truly, Maxine is moving fast right now, in all sorts of ways.

For a woman with her extensive list of bona fides in skydiving and in life, Maxine’s absolute zeal for exploring the limits of her skill envelope — and for digging deep into beginnerhood in entirely new-to-her pursuits — is refreshingly un-egoed. By way of explanation: As of the 2019 season, Maxine has been competing in canopy piloting for seven years. She’s decided to move away from that, but she insists that she’s a competitor at heart. 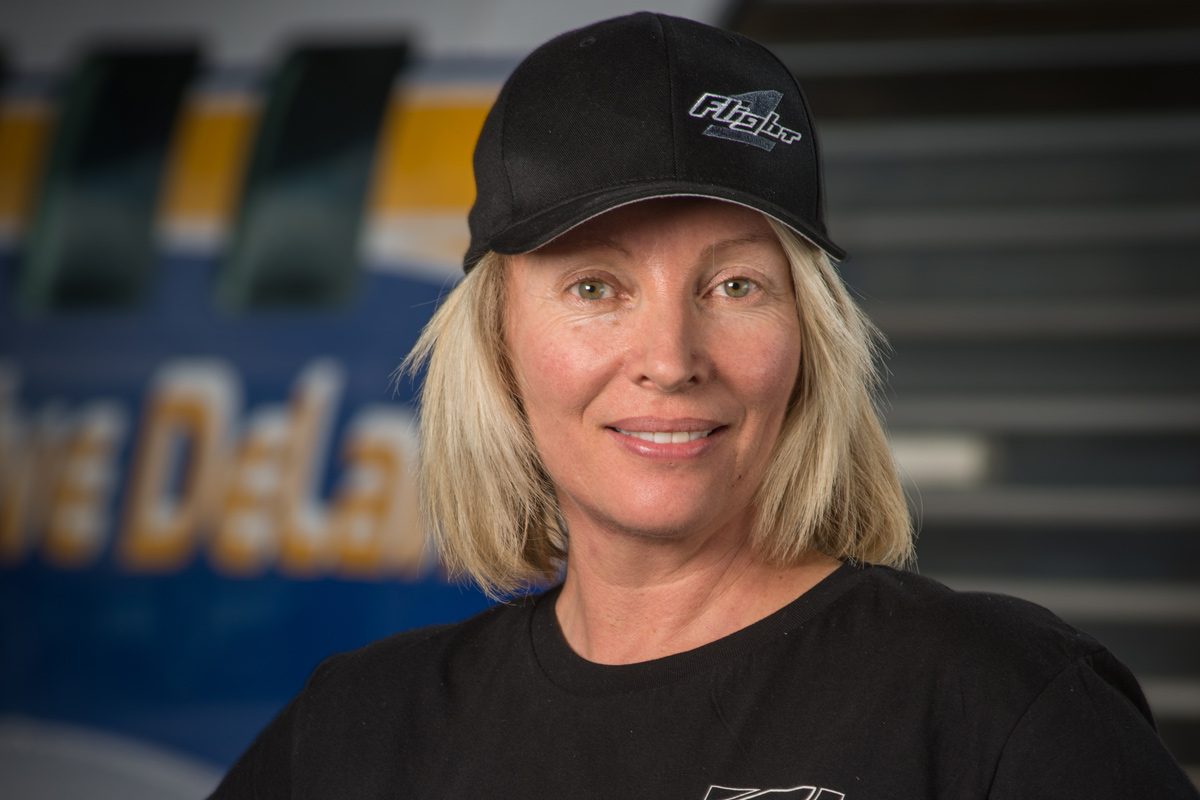 “I don’t seem to be able to leave that alone,” she grins, “so at the end of last year I went in thinking, ‘Okay, what am I going to compete in next? What do I like doing?’ Well, I like to go fast. That’s no surprise. I’ve already competed in various flat and canopy related disciplines, I don’t do much free flying at all, I don’t fly head down, so the natural choice would be speed skydiving which is all about flying almost head down. I’ve never done it, but I always want to learn something new. I really love being a newbie.”

“Speed skydiving is relatively still in its infancy as a discipline,” she continues, “It has been around a few years, and it seems like everybody is experimenting with techniques. I had a chat with a few competitors for advice and then had a go. They are using the Flysight as the measuring tool now, and I’m very familiar with the platform from canopy piloting. You have the ability to use data analysis to improve performance and figure it out – it’s not guesswork anymore; you can look at the information and learn from it and that appeals to me. That’s the eternal student in me, I suppose.” 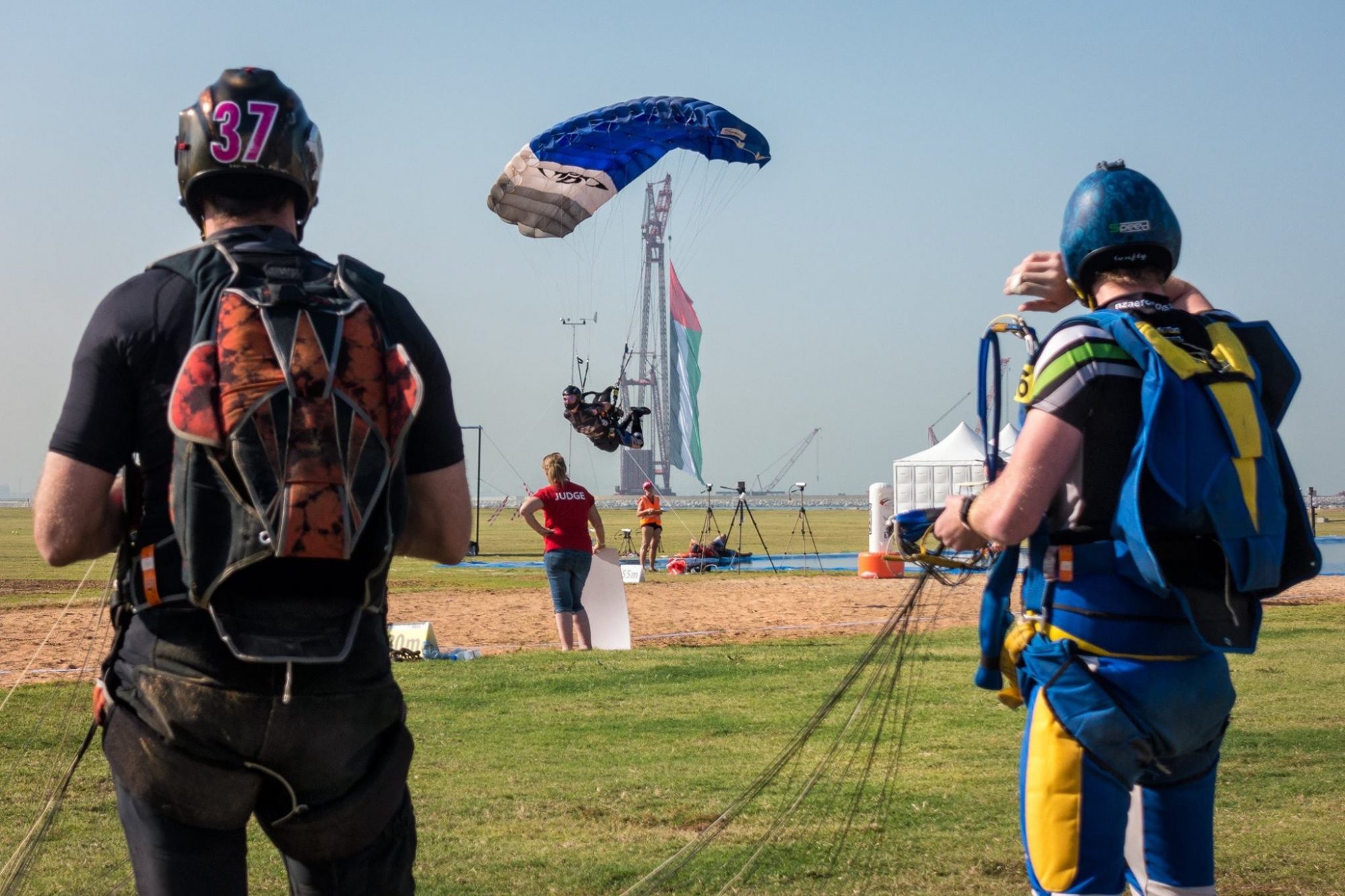 That mentality was very much in evidence, too, when Maxine was an actual entry-level student. When she first started skydiving, she went down the classic belly-flying route, and she got the fire in her belly for formation skydiving straightaway. An AFF instructor on the dropzone where Maxine was certified started a team, and she and Maxine competed in both 4-way and 8-way for the first four years of Maxine’s career. She absolutely ate it up.

After that, Maxine moved to Australia. She started to do more 8-way in Aus, but after four years or so of hard-core competition in FS — being a highly considered person — she had an interesting realization. “I realized that, as I was spending all my time as an FS coach and in the tunnel teaching body flying skills, my canopy work was really quite shoddy in comparison,” she says. “At this point, I was competing at a very high level in FS and I really felt like I wasn’t a well-rounded skydiver. I decided to make sure that I was competent in all of the prerequisite skills to be a skydiver, not just what I was focusing on.” 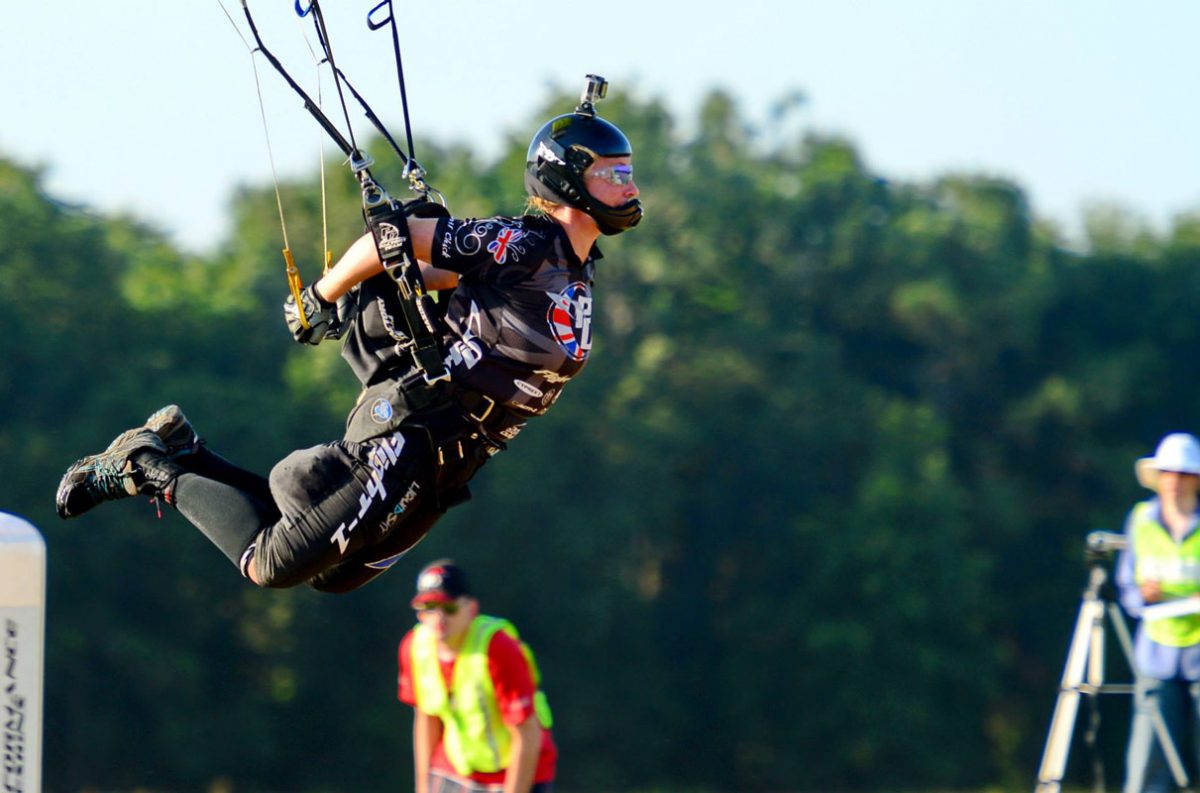 Determined not to be any kind of one-trick pony was a seminal moment in Maxine’s career. Right away, she set about putting in the same amount of energy, enthusiasm and time into the other areas of her skydiving career. That’s when she went out looking for help with her canopy work, and that’s when she insists that she started becoming the world-class canopy pilot she is today.

“I didn’t come at it with a lot of natural talent as a canopy pilot,” she laughs. “But, for me, this is how I connect with the word ‘Merit.’ I don’t think you have to be naturally talented in a particular discipline to be good at it. What you need to do is recognize the amount of work that has to go into it in order to deliver the results.”

Unsurprisingly, Maxine enjoyed the challenge. She started flying more wings. Before long, she went down the competition route.

“I’d just come off a full season of training 8-way FS, so the idea of being a team of one as a canopy pilot seemed way easier than a team of nine,” she says. “So I started swooping. But even at that time, as a pro canopy pilot and a competitor, I still wanted to try and learn other related skills. There is so much symbiosis in the other disciplines, so I did a season of 2-way sequential CRW and competed at US Nationals – it definitely made me a better canopy pilot.”

Maxine joined up with Flight-1, the leading canopy school in the sport, in 2010. There, she found a group of athletes who share her passion for constant, optimized learning — and for passing that along to the next, keen generation of skydivers.

“A mantra we have [at Flight-1] is to be an educator, not a regurgitator,” she enthuses. “An educator takes information and gives it to someone in a way that they are going to understand and relate to fully, which is different for every person. That’s the challenge I love about being an instructor: it’s the art of getting the best out of every single person you work with, especially in skydiving, where you are working with adults who have already developed a certain means of learning. It is the skill of the instructor to help focus in on how that person learns best.” 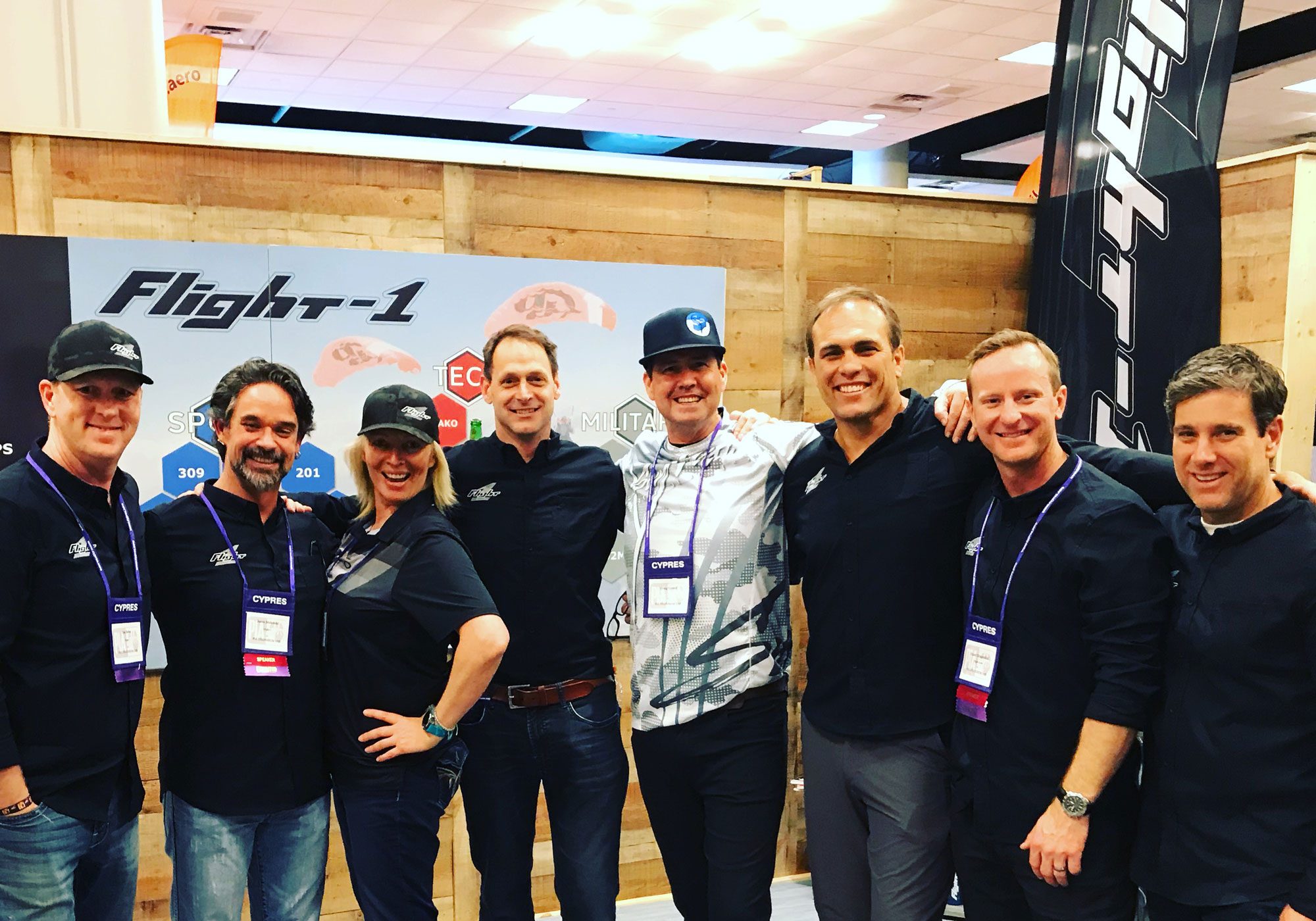 That’s not easy, of course. One of the challenges Maxine points out is that — let’s face it — the timeline for learning in skydiving has become quickly and decidedly compressed. With the advent of the tunnel, athletes with a freefall issue can leverage the repeatability of the tunnel to solve problems in a day or two of focused work.

“If you are going to change the way you perform a maneuver, you need to break down the old muscle memory, replace it with the new methodology and then repeat it enough so it becomes the new muscle memory,” Maxine explains. “That doesn’t happen in one or two jumps. You may be able to achieve it in an hour of free fall time say, which you can manage in the tunnel in a day or a weekend. But you can’t do that under canopy.”

“The reason why earning a Merit resonates so strongly with me,” she continues, “is that the only way to improve your canopy piloting skills — which should be the goal for everybody as a skydiver — is to do the work . You have to put the time in and get the repetition, and the best you can manage with a canopy is to do a high pull, for example, and get as much repetition as possible in the air. It takes hundreds of jumps to create that muscle memory and integrate it into an intuitive reaction. I think people nowadays get a little frustrated that they don’t see big improvements instantly in their canopy handling skills, and sometimes, ironically, that prevents them from putting in the work.”

For Maxine, the idea of Merit is tied inextricably to that work. For example, she points at the pantheon of top-level skydivers all around her. 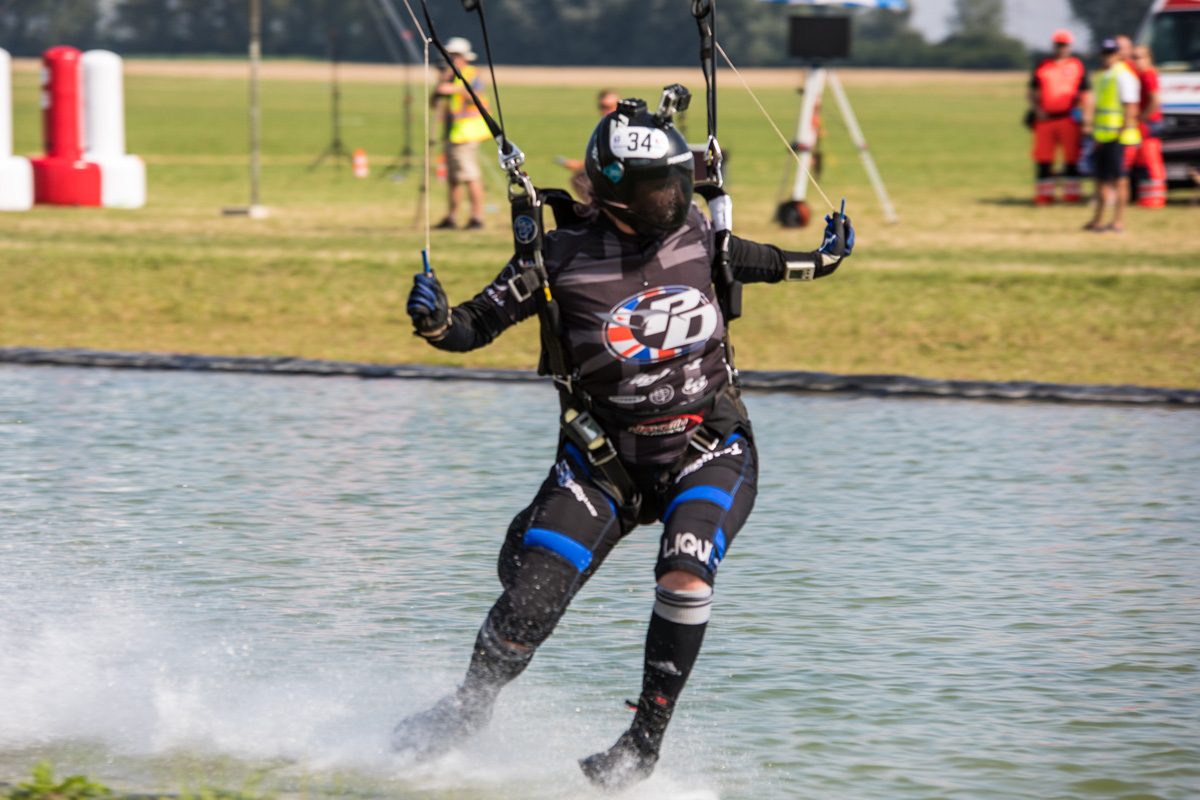 “Here is the thing: All of the athletes, myself, colleagues, competitors, friends, we do the work,” she insists. “We do a lot of work behind the scenes. I think we should do a better job of telling that story and describing the hundreds of jumps that go into developing a stellar zone acc run for example – so that people understand that we have been through it too. There are only a very small handful of athletes in the top 30 that are naturally talented pilots. You don’t necessarily need to be born with a riser in your hand. You need to put in the work and — most importantly — believe in your ability to get to your endgame.”

At the end of the day, the students who walk away are all walking away from one thing: Fear of failure. That saddens Maxine, but she understands where they’re coming from.

“Sometimes we are the ones that stand in our own way because we don’t believe in ourselves enough to keep at it,” she says. “But failure is the last thing you should be running from. Actually, I think it should be embraced in a big way. It is said, ‘If you fail, don’t give up because FAIL stands for first attempt in learning . And the end is not the end. In fact, END stands for effort never dies . In other words, if you don’t do the work, you aren’t going to earn the Merit, and the only person you’re truly disappointing is yourself.”

According to Maxine: when it comes down to it, your own opinion is the only opinion that matters, and it is so much better to be your biggest advocate than your biggest naysayer. She insists that the most important thing is not to let fear of failure — in your own eyes, or in other people’s eyes — be your reason for quitting. Ultimately, to Maxine, quitting is the only true failure.

“I think people should care less about the opinions of others and focus more on whatever they have to do to achieve their goals,” she says. “Allow yourself to fail, then fail again and again and again, until you succeed. One doesn’t exist without the other. Commit to the endgame and remember we are so much more capable than we think we are.”

Thursday is ‘Merit Day’ at the Big ‘O’

The good people at Merit are sponsoring Maxine Tate during the Big ‘O’ Boogie to add value to the fun jumpers at this event. Maxine will be serving as an LO and as a Flight-1 instructor can help with your canopy flying skills and landing!

Merits will be awarded throughout the day to those that have earned them!