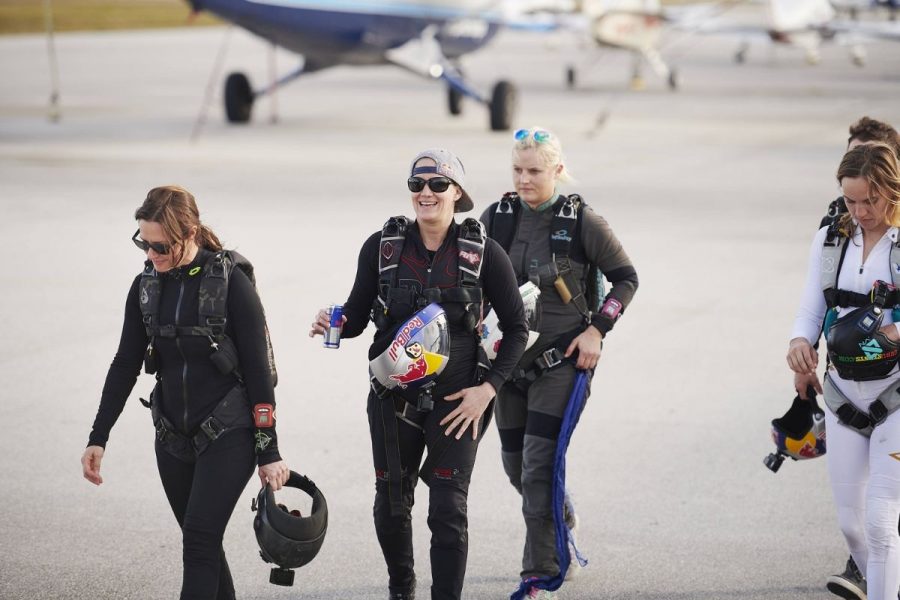 Nobody wears a Red Bull helmet like Amy Chmelecki. That great big blue-eyed grin pours out of the visor like sunlight, casting good vibes in every direction. That grin has been traveling around the skydiving world stage for more seasons than you can shake a stick at, and there’s no sign that’ll ever slow down. Luckily, we were able to snag Amy for a few minutes between airport lounges to find out what she’s been up to. (Predictably: A lot!)

DZM: We heard you recently got married. Tell us about it–and about the lucky guy! Is it more challenging being on the road now that you’re hitched?

Amy: I met my husband in Mexico at a boogie. We’ve been together a little more than four years. His name is Franck. He’s French. He’s wonderful. And no, it hasn’t been more challenging! Franck gets it. He has been along for this ride since the beginning, and he totally supports me. We trust each other completely. It is very cool.

We got married at the courthouse in Eloy with a handful of friends in attendance. I wasn’t even going to wear a dress, but my roommate had a dress that she’d bought at a thrift store that was cool and fit me. She got flowers for my hair and a bouquet. [Arizona Arsenal teammate] Sara Curtis made us an amazing carrot cake. The whole thing was simple and perfect.

DZM: Let’s talk about the other love of your life–the energy drink company. You’ve been a Red Bull sponsored athlete for a few years now. How was the adjustment from team athlete to superstar?

Amy: When [Red Bull] hired me, I was busy training full-time with my VFS team, Arizona Arsenal. They told me they didn’t want me to change a thing; that they were going to fit around what I normally do. Red Bull is a great company in the sense that they don’t try and force something that isn’t natural. They take the things that each of us as athletes are interested in and already excel at and just build on that.

[This relationship with Red Bull] has taught me that each person has things we are good at and naturally drawn to. A good manager can bring out the best in each person to get the job done, and it works out so much better. When people are already naturally inspired and happy about doing something, it’s not work; not really.

DZM:  What’s asked of you in exchange for that snazzy helmet?

Amy: It’s pretty simple: I’m representing the brand by being a professional skydiver. A lot of that revolves around the normal things I do within the sport of skydiving, whether it’s competing or coaching, and traveling around as a skydiver…so, basically, what my normal day-to-day as a professional skydiver was even before Red Bull. In addition to that, we do demonstration jumps; special projects; social media projects.

We have this cruisy thing going where we’re all getting stuff done and really having fun doing it. Everyone is encouraged to bring out the best in each other, in the directions, they’re already going. It’s great. I love it. So it wasn’t an adjustment at all, really.

Amy: Since I’m no longer on a competitive skydiving team, all of the jumps I do outside of Red-Bull-related training are for coaching, load organizing and fun. I do maybe four to five hundred jumps every six months, and around a demo a month.

DZM: Some of those demos look pretty gnarly. Do you have the ability to turn down gigs if you’re uncomfortable with the dynamics?

Amy: Definitely. I won’t choose to do a demo that seems too gnarly. Sometimes, you just don’t know what you’re going to get, but if I know a jump is going to be a double black diamond run, I just steer clear. The team allows us to work within our comfort zone. If something happens, the result is bigger than one of us simply having a bad demo jump.

DZM: #Squadgoals, for sure. Aside from working with such a great team of fellow badasses, what are some of the other perks about your life that people may not be aware of?

Amy: I get to do what I love for a living, and I feel like that is an obvious perk. Maybe it’s not so obvious, though. I definitely don’t know if my family really understands exactly what I do. It’s hard for them to really conceptualize that my job is jumping over an island in the Netherlands with really awesome people, going really fast. It is the greatest gift–as far as a career is concerned–that I could possibly imagine, just being able to do what I want to do.

Amy: Easy: Traveling problems. Flight delays. They happen all the time. Sleeping in airports. I’m sure everyone reading this has experienced flight delays. The big difference is, doing this stuff, you’re traveling so much more.

I work it the best I can, but there are definitely times where you’re lugging a bunch of giant, heavy bags and your flights get canceled. You need to figure it out, and now all of a sudden something that was barely making any money is now costing you money–and it’s late, and suddenly you have to rearrange everything because people are depending on you on the other end. You just have to ride the wave.

It’s hard to stay healthy, too. I get really bad allergies–sinus issues–and I constantly battle with that. I’m constantly working to keep my immune system strong, but it’s not always easy when you’re going from boogie to boogie and event to event in different time zones.

DZM: When you’re between all that jetsetting, what’s your ideal day off?

Amy: That’s such a trick question! Honestly, my favorite stuff to do is the stuff that I do for work. When I have days off, they’re much more about just recuperating and resting than anything else. I definitely enjoy some of the “normal kind” of fun things: like going to an amusement park with my little cousins, or spending time with my family; spending time with my nieces and nephews. Laser tag is my new discovery. I want to do more of that.

DZM: You could jump anyone’s rig, but you jump the Curv. What do you love so much about this rig?

Amy: Oh, man, there’s a list of things that I honestly love about the Curv. I am fortunate to have choices out there, but there’s nothing I’d rather jump. There’s this cross-section on the back of the yoke that keeps the rig on your shoulders really nicely–especially for a curvy person like myself–even when I’m at a steep belly angle. The articulated harness, too, makes the rig fit me really well. I’ve never found that kind of fit in another rig. It has always been a problem for me.

The way we fly is constantly evolving and changing, so the manufacturers have to keep up with it. Rigging Innovations certainly does. I adore Brenda and Sandy as a couple, and Rigging Innovations is their baby. Sandy has got this passion for making things better and evolving the engineering of everything they make. On the Curv, for instance. The Curv is the best solution to the problems that I’ve had in the past with the type of flying I’m currently doing.

Oh, and my husband really loves packing the reserve. He is, like, totally stoked. He loves packing Curvs. That makes me happy, of course.

DZM: Happiness seems to be your secret weapon, Amy! Is it? What’s the best advice you have for someone who wants to follow in your footsteps?

Amy: Good vibes! Be nice to everybody. And find your own footsteps! Seriously. There is no way that anyone could be anyone else unless they were born to that person’s genetics and experienced the things that person has experienced throughout their life.

Everybody has to decide for themselves what they really enjoy; what risks they are willing to take; what they are willing to sacrifice to reach their goals. It’s very personal. Everybody has got to figure out what it is that they want to do–and how they can uniquely make things happen in the best possible way for themselves. Just work hard and have faith that it’s going to work out. Is there any other way?