Being a DZO is not getting any easier. Despite the obvious ups and downs of owning a dropzone, a DZO’s resolve has never needed to be more calloused than it is today. Let me share what’s happening in the Kansas City marketplace and something I’m seeing in other parts of the country too:

Groupon and Rushcube working together.

The hypocrisy of Groupon continues to reek especially in the faces of small business owners who Groupon claims to be helping. The video below is Groupon’s 2018 Super Bowl commercial which boldly decries:

“When you use Groupon in your neighborhood, you’re not only saving money, you’re also supporting local business… I mean, what kind of person wouldn’t want to support local business?”

As it turns out, it’s Groupon themselves.

Skydive Kansas City’s owner, Chris Hall has a challenge on his hands. Not only is Chris competing against two dropzones in his marketplace, he’s also competing against Groupon’s partnership with Rushcube which is employing some ethically questionable and possibly illegal marketing practices because of how they capture unassuming customers in their sales funnel. Here’s how Groupon is marketing:

Groupon is competing against Skydive Kansas City within the Google search results page by using Google AdWords. It could be argued (easily in my opinion) that Groupon is creating confusion with the customer as their ads state ‘Skydiving Kansas City’ which is awfully close to Chris’ branded business term: Skydive Kansas City. 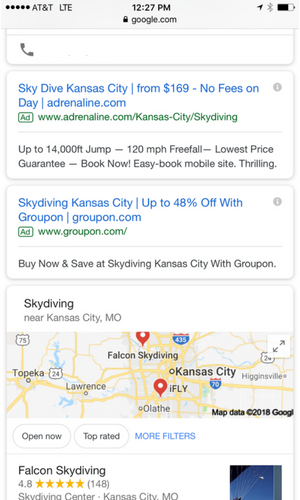 While it could be argued that the customer didn’t read and follow all of the information, Groupon makes things very confusing for the customer as they provide a company description for Skydiving Kansas City as if it were an actual company, of which there is not. Adding further confusion is the presentation of a company website which a consumer would rightly assume is legitimate.

It’s my opinion this is false advertising and Mr. Hall has legal grounds to fight this as this as this kind of advertising is causing confusion in the marketplace off of Skydive Kansas City’s brand.

It doesn’t take a rocket science to see the smoke and mirrors a consumer needs to navigate to figure out what’s going on.

Should the consumer wish to gain more information, this is what they’ll see when they visit the ‘Company’s Website’ for Skydiving Kansas City as represented on Groupons page. 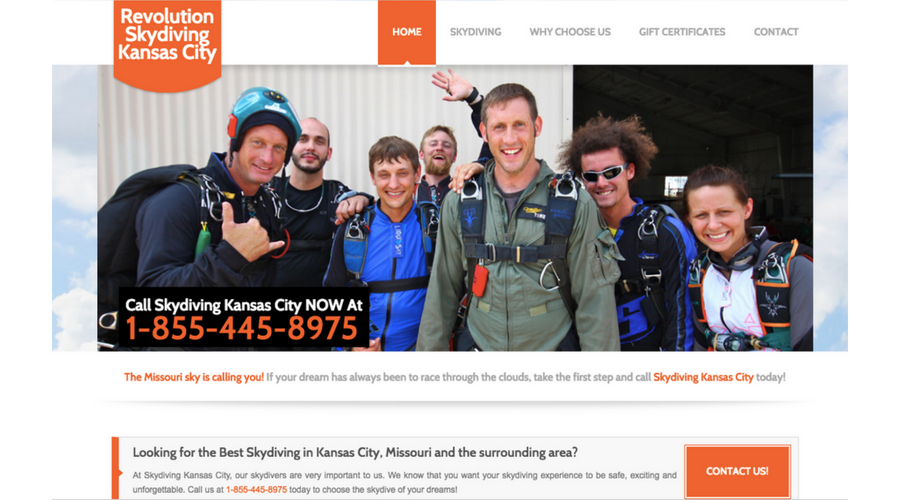 And now you’ve left Groupons page and entered into the blurry world of Rushcube!

Feigning to be a customer, I called Rushcube’s toll-free number and was given the standard run around. I shared that I had a group wishing to purchase Groupons to go skydiving and I wanted clarity on the location as I couldn’t find a ‘Revolution Skydiving Kansas City’ on Google Maps.

The response: “I’m sorry sir, we can’t disclose that.”

Though they wouldn’t tell me the company name they were able to tell me the town that the dropzone is located which is in Clinton, Missouri.

Other Markets Where This is Happening

What Should You Do?

At a minimum, you should flag this with your Groupon rep. If Groupon doesn’t remove the deal, I’d advise getting a lawyer involved especially when the tactic being used is trying to win customers by creating confusion off of your trade name or with bait and switch advertising where a false company name is used to give the impression of a real entity.

James La Barrie is passionate about marketing and changing a company's service culture. Originally from the Caribbean island of Antigua, James melds his approach of marketing and delivering elite service together as one. James has injected his 'service marketing' approach throughout his career to transform companies from good to great.